There are multiple ways a pivotal election might affect a major industry, but many of them aren’t as influential as one might think.

Let’s be honest: 2020 has been a dumpster fire. A global pandemic has trashed the international marketplace, unemployment spiked to its highest point since The Great Depression and, speaking of depression, symptoms of mental angst have risen three-fold since the start of the novel coronavirus lovingly known as Covid-19. People around the globe want that easy fix, and elections naturally represent a time of replenishment. Hope. And those within the United States are specifically wishing the upcoming elections shall positively boost the nation and major industries such as automotive.

However, not so fast. Sometimes elections help, sometimes they hurt and sometimes they have no perceptible effect. So let’s take a quick look at five potential ways the upcoming elections might affect the auto industry: post-election sales, industry regulation, governmental relations, international tariffs and foreign exchange effects. 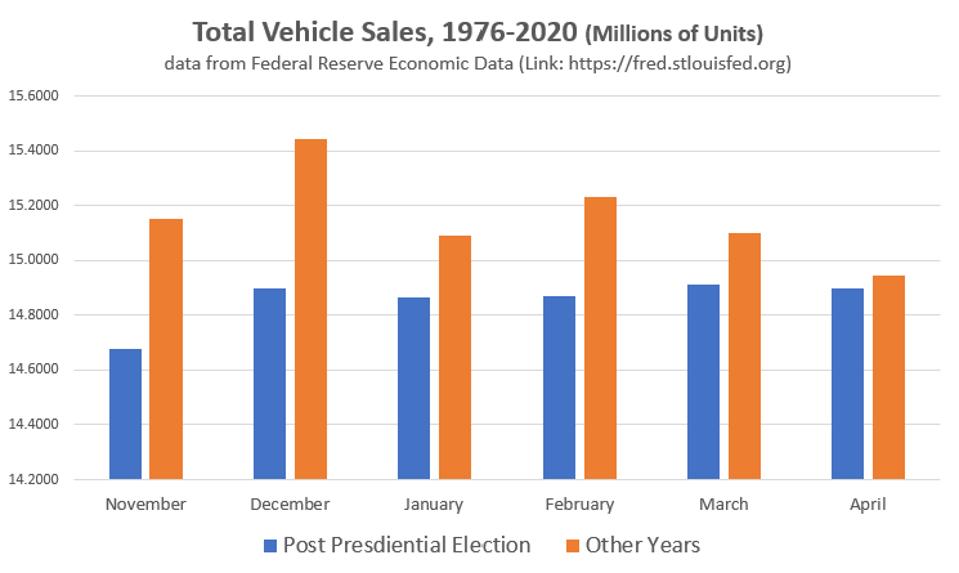 Hope springs eternal except for vehicle buyers after an election, it appears. For several months, sales are lower after a presidential election.

Depending upon news sources, one might hear two opposing, supposedly-fact-based predictions: either “Conservative, fiscal policies allow corporations to thrive and revenue to increase” or “Taxing corporations rather than middle-class households creates greater spending cushion for the masses, which boosts sales.” However, here’s one truism that’s consistent throughout: facts and politicians are distant cousins, especially in the digital age of social media.

Here’s the truth based upon quantitative fact: automotive sales diminish in the six months after an election regardless of the party elected or incumbent status going back to 1976. In fact, the data is so clearly statistically significant in some months (0.96) that elections’ correlation to new vehicle sales surpasses the new car sales’s correlation to unemployment (0.81). In other words, the head of the household is more likely to announce, “You know, we just elected a POTUS, so let’s pause that new car” than “Maybe being unemployed should curb my vehicular spending.” Certainly there must be alternate, hidden causational factors, but the correlations are clear: do not expect the election to stimulate automotive sales. 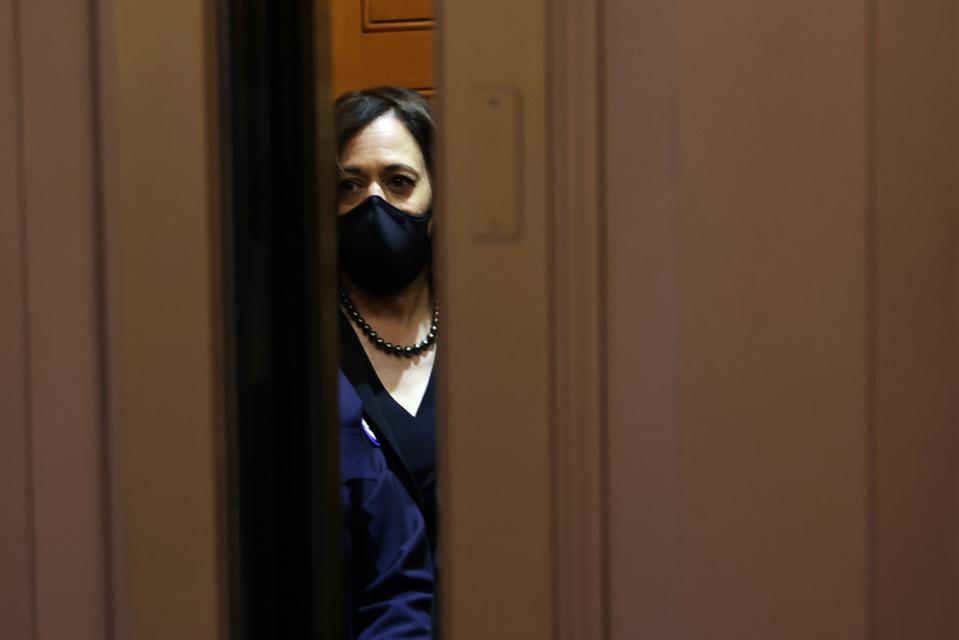 Automotive buyers and industry executives might have opposite wants on industry regulations such as functional safety, environmental emissions and cybersecurity: the former group wanting stricter oversight and the latter wanting laissez-faire leadership.

And depending upon which fear-mongering commercial a biased media outlet is airing, observers might believe Trump and the Republicans’ history of deregulation shall unfairly favor the corporations or Biden and the Democrats’ platform stands to impose burdensome rules. For example, one public policy organization keeps a running tracker of 235 “deregulations in the Trump era” ranging from the repealing of emissions standards to amendments on hazardous materials regulations to even motor carrier hours of service.  And conversely, one prominent law firm reviewed the Biden Energy Plan by saying it “… represents a significant paradigm shift on energy policy within the Democratic Party….” And looking at Democratic Vice-Presidential nominee Senator Kamala Harris’s record, there is reason to believe she will favor a functional safety and environmentally conscious policy.

The short-term truth: the election will not immediately act as the salve for 2020’s pains here either. Both the Congress and the federal courts will have holiday recesses in November and December, and the vast majority of regulatory actions do not occur soon after the election. For instance, of the 235 aforementioned deregulations, only twenty-five (25) occurred within twelve months of the 2016 election and most of those were in the 11th month.

Yes, the long-term truth might be significant. The Trump Administration originally had the goal of repealing 469 and suspending another 411 Obama-era regulations (and other 391 that would eventually be reevaluated). In the end, though, the fear of expensive recalls, prolonged litigation and punitive damages are much more likely to inspire appropriate engineering rigor and corporate improvements than any election. The governments have typically allowed federal agencies, civil courts and Wall Street to determine the financial fates of automotive miscreants (e.g. Takata).

Likely Effect: Little in the Short-term 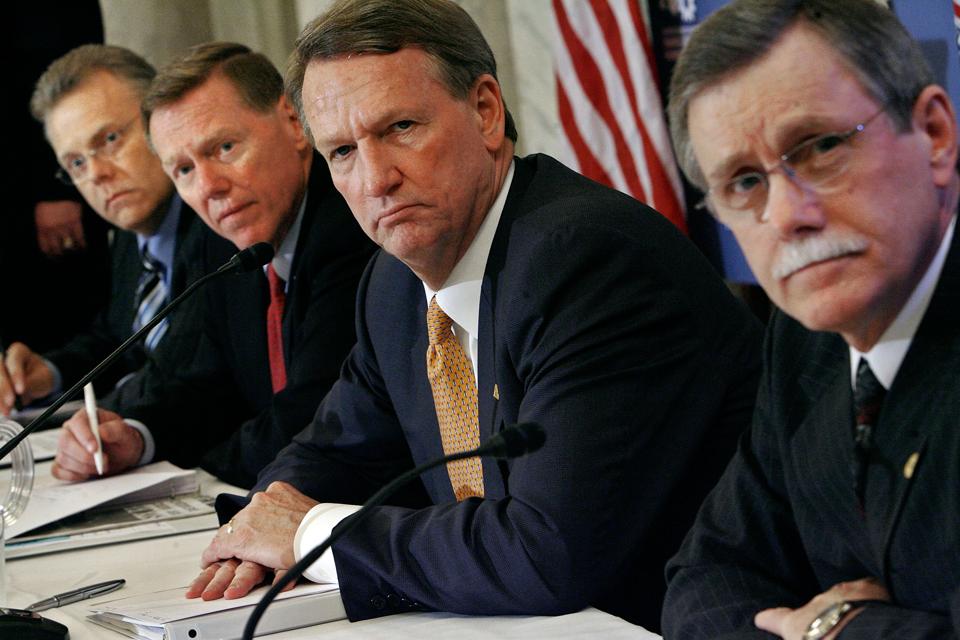 Sometimes industry and governments work together in harmony, and sometimes they cast accusations like bludgeoning stones in front of rolling cameras. Again, the naïve, biased listener might either believe the declarations that conservative, Republican leadership belly-up to the bar with CEOs or read polls like the 2013 Gallup survey that suggested more Democrats (54%) than Republicans (44%) have a positive rating of the automotive industry.

In reality, both parties will tell the public they are “the greater friend of industry” after an election and find advantageous times to grandstand before an election. Almost coincident with the 2008 elections, Republican Representatives like Brad Sherman famously asked the automotive CEOs who flew private jets to Washington D.C. seeking $25B in federal loans if they flew commercially. Soon thereafter, Senate Democrats proposed denying bonuses to U.S. auto executives with salaries over $250,000 per year in exchange for the loans. And earlier this year, the “Commander in Tweet” attacked General Motors GM on Twitter stating the automotive manufacturer somehow wasn’t producing medical equipment quickly enough during a time when the incumbent’s reelection numbers were souring.

In reality, election years bring out the worst in politicians so November, in theory, should decrease the mudslinging and reinvigorate the industry-government partnership. 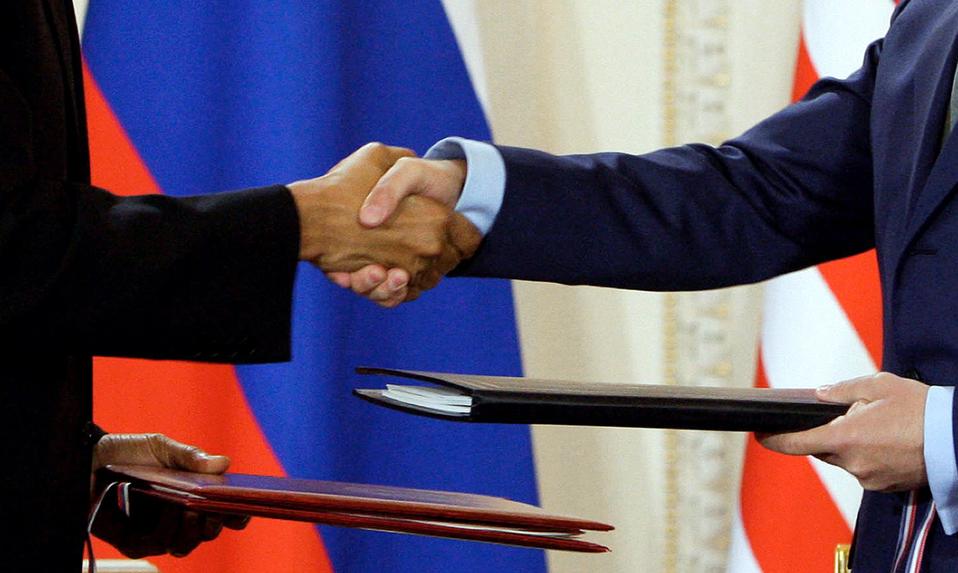 Changes in tariffs and treaties can either empower or restrict free trade and date back to 1789. Tariffs typically protect domestic jobs from foreign imports while causing the consumer to pay higher prices, and 2020 was no stranger to tariffs with $80B of new tariffs imposed on thousands of products. Treaties can open new marketplaces to commerce akin to the North American Free Trade Agreement (NAFTA). So will tariffs or treaties shake-off the 2020 blues?

Most of the large tariff actions – both increases and decreases — have not occurred soon after an election: the Tariff of Abominations (1828), the Underwood Law (1913), the Smoot-Hawley Tariff (1930), the Trade Agreement Act (1934), the Gatt Agreement (1947) and the Trump Reciprocity Trade Wars (2019). The only significant increase in tariffs after an election was the Morrill Tariff (1861) which was adopted just five weeks after James Buchanan became POTUS and was part of his platform.

Treaties also appear to be lesser in the years after an election. From 2000 onward, there have been 175 treaties ratified with an average of 18.2 treaties confirmed within an election year and only 2.2 treaties on average the year afterwards. In other words, a lot of action before the election, and the year after the election is the equivalent of a professional ball player after signing a fat contract.

Likely Effect: Little in the Short-Term 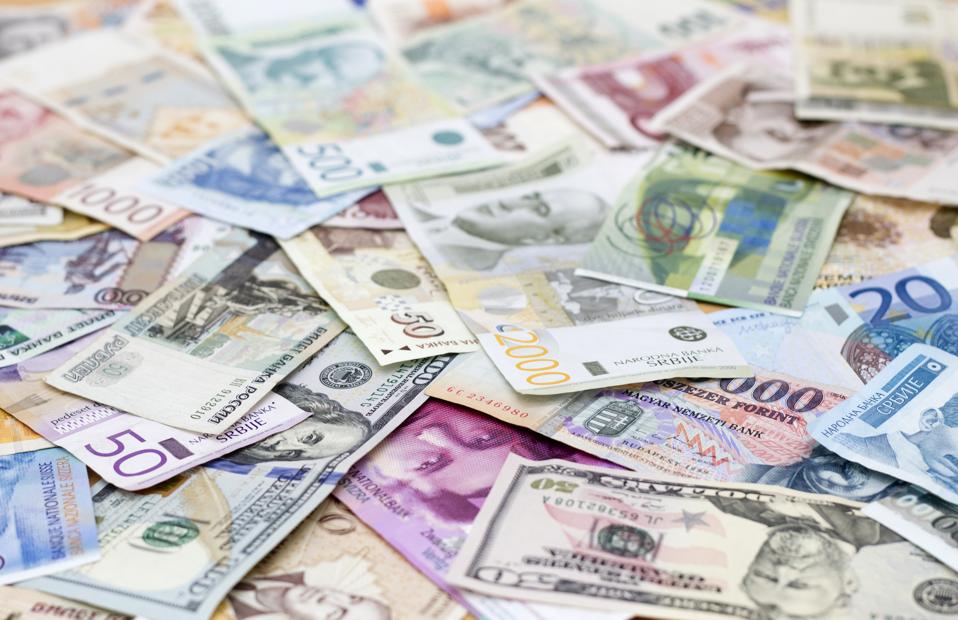 The relative value of monies can affect the balance sheet of global corporations.

Fluctuations in the value currencies can have positive and negative effects for global corporations. For instance, if an automotive business case was created in 1995 based upon selling a vehicle in the European Union five years later, the U.S. dollar (USD) fell from 1.3 Euros to the dollar to 0.866 Euros. Therein, understanding the foreign exchange effects from year to year and the effects of elections is important.

From 1995 to 2019, the USD foreign-exchange values in November were the worst on average in presidential election years for the following currencies: the Euro, the British Dollar, the Australian Dollar, the Canadian Dollar, the Chinese Yuan Renminbi, and the New Zealand Dollar. For some of the currencies, the difference was significant: the USD could buy 3.4% more Euros (EUR) and British Pounds (GBP) on non-election years than election years.

Certainly some currencies experienced their best years on average versus the USD in the year after a presidential election, but the difference on average was typically negligible, e.g. 1.3% fewer Indian Rupees on non-election years and 0.1% fewer Hong Kong dollars. The exception to this has been the Japanese Yen, which performed the best on election years, such that on average the USD bought 7.2% fewer Yen in other years.

Likely Effect: Varying, Depending On The Company

In all likelihood and regardless of winners, the elections will not bring about a step-function panacea. The world will certainly shift in some fashion and, per the hopes of many, hopefully towards some improvements.

What will come to an abrupt end: the election-based spam calls (thankfully).

previous Upskilling Cyber Teams: The Question Isn’t How, But Why
next Online classes could lead to more diverse cybersecurity workforce | Opinion
Related Posts