Are Zoom Chats Private? Here's Why You Should Think Before Opening The App

Internet Censorship During COVID-19 Is Threat To Cryptocurrencies And Liberty

High-Net-Worth Individuals Are Cyber Targets, Even More So During The Coronavirus Pandemic

As More People Need To Work From Home, Companies Need To Ask Themselves If Their IT Managers Are Up To The Task

A man walks past an ads poster at an Internet devices shop in St.Petersburg, Russia, Thursday, April 11, 2019. Russian lawmakers approved Thursday a bill that would expand government control over the internet and whose opponents fear heralds a new era of widespread censorship. The bill would install equipment to route Russian internet traffic through servers in the country. (AP Photo/Dmitri Lovetsky)

To its supporters in Russia, it is a necessary and responsible cybersecurity measure. To its critics, it raises the prospect of censorship.

Russia’s lower house of parliament, the Duma, has approved legislation which would provide for ‘sustainable operation’ of the internet in Russia — in the event that the country was disconnected from the rest of the global network. While the legislation still has a couple of stages to go, those look to be a formality, and the new law could come onto effect in November.

Lawmakers who supported the bill are apparently concerned that relations with the West could deteriorate to such an extent that there might be moves to cut Russia off from the internet. They are quoted as citing the White House’s criticism of Russia in its Cyber Security Strategy — published in the fall of last year — as evidence to support their case.

Especially in the big cities of the western part of the country, Russian internet connectivity is good, and widespread. Russians rely on the internet for shopping, business, travel and other everyday purposes as much as anyone in any other technologically developed country. Like any other country, Russia wants to ensure that the internet — upon which so much of a contemporary country’s economy relies — is protected.

Cybersecurity, or something else?

Critics of the new laws see another motive.

In other words, new legislation presented as a security measure offers, in the views of its opponents, considerable potential for censorship.

Russia’s traditional media are largely owned by the state, or by companies sympathetic to President Vladimir Putin’s administration. Consequently, the internet has been the medium of choice for Mr Putin’s political opponents — especially younger and tech savvy ones. 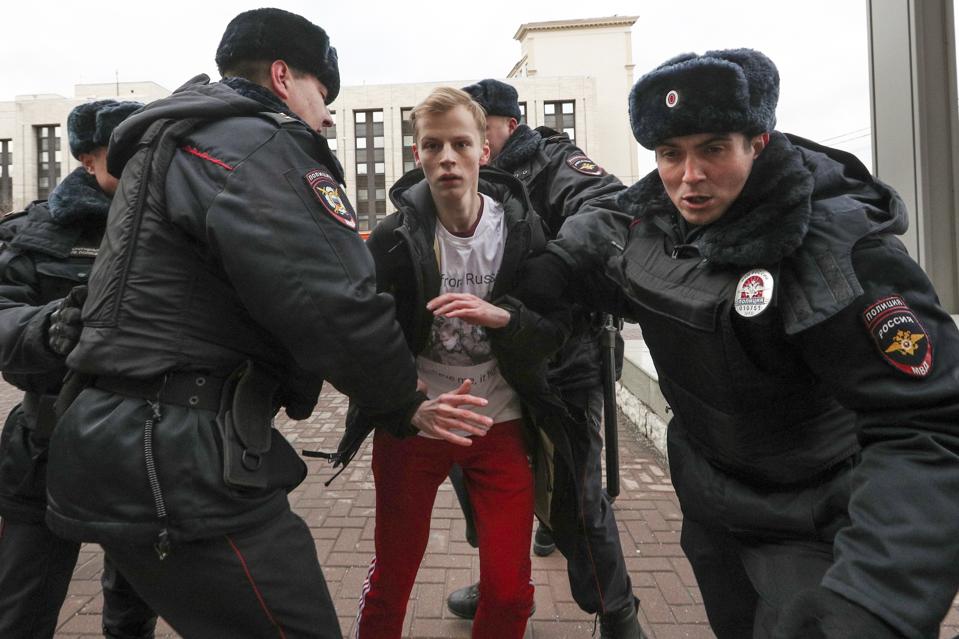 Police officers detain a demonstrator after the Free Internet rally in response to a bill making its way through parliament calling for all internet traffic to be routed through servers in Russia — making VPNs (virtual private networks) ineffective, in Moscow, Russia, Sunday, March 10, 2019.Several thousand people have rallied in Moscow to protest legislation that they fear could lead to widespread censorship of the internet for Russian users. (AP Photo)

Fearing for the consequences the new legislation might have for freedom of expression, thousands of people took to the streets of Russia’s major cities last month to protest — this in a country where taking part in political demonstrations can lead to arrest and even jail sentences.

They were worried that a Russia-only internet could be a heavily censored one.

What does Russia want to achieve?

There are questions as to how effective the measures could be if they were put into effect. Political activists have claimed that the number of cross-border internet service providers in Russia — which they put in the hundreds — would make it hard to enforce.

Russia also knows how this looks. The Prime Minister, Dmitry Medvedev, said specifically last month that Russia would not “have Chinese-style regulations”.

The challenge for the Russian government seems to be that it wants the potential for greater control over the internet — but it doesn’t necessarily want to use it, or to be seen to want to.

The official position been summed up neatly by Alexander Zharov, head of the Russian communications regulator, Roskomnadzor.

In comments reported by the Russian website Newsru.com, Mr Zharov compared the legislation to “a fairly serious weapon” — one which he hoped would, like a nuclear weapon, remain in “sleep mode”.

This article was written by James Rodgers from Forbes and was legally licensed through the NewsCred publisher network. Please direct all licensing questions to legal@newscred.com.

tags: editor's pick featured
previous Smart-Speaker Makers May Be Recording Users To Improve Natural Language Processing At Expense Of Privacy
next Regulators Want CEOs To Go To Jail For Cyber Failings, Should You?
Related Posts

Are Zoom Chats Private? Here's Why You Should Think Before Opening The App

Internet Censorship During COVID-19 Is Threat To Cryptocurrencies And Liberty